Simply put, I have finally come to the realization that stuff does not equal happiness. Oh, I’ve known it in my head for years. But I didn’t really understand it. It was one of those things that “everyone knows” but that no one ever follows. I was dissatisfied with something in my life and felt that the next knick knack or doohickey would bring me happiness. But now all this stuff does not support what I want to do or who I want to be.

As I said in my very first post – Jules and I want to get a tiny house but we own too much -some people would say it owns us- and would never fit into a tiny house. We talked about getting a storage unit but that seems like it isn’t the right solution. Oh, we will probably have one for seasonal items, like camping gear or winter clothing, but there is no need to store things away forever.

Now we might not end up in a tiny house. We might just move into a small apartment. Either way we cannot do that until we have less. Our stuff requires space in the form of a storage unit or a large apartment and that costs money. Prisoners of our possessions.

So, in that vein, here is what I am finding another place for today: 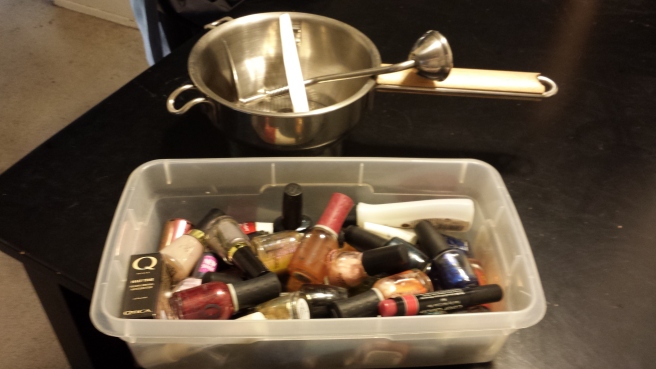 On top is a food mill. I used to make chile sauce out of various dried chiles I found in a local market. It was fun and the sauce was very tasty. But it went bad before I could use it all and I never started canning like I wanted to preserve it longer. Someone will use it.